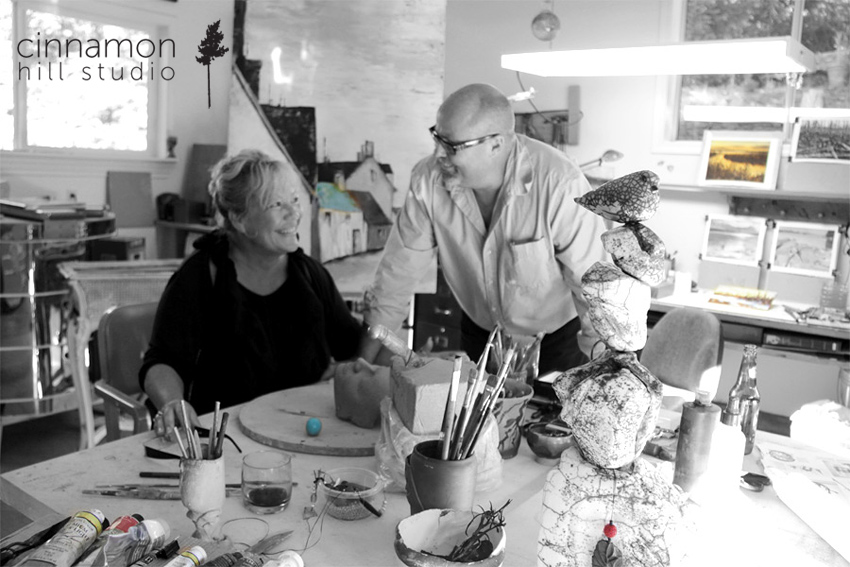 The work of Joanna Drummond (b. 1952) is endlessly evolving. Originally from Toronto, Joanna moved from Ontario to Alberta in 1976.

Joanna was instrumental in the community arts scene. Her guidance and eagerness helped establish the St. Alberta Potters Guild. Joanna’s passion and talent in sculpting clay (blending traditional hand building with new unexpected techniques) and firing Raku catapulted her onto the national scene as an artist as well as an instructor. Her ability to master this complex process has given her the confidence to gamble on her own intuition.

During Joanna’s thirty-five year career her work has found its way into homes and collections all over the globe. As well, Joanna’s work has been exhibited in The Mountain Galleries of Jasper, Banff and Whistler. She has enjoyed numerous private ­­­and public gallery showings throughout Western Canada.

Joanna’s philanthropic spirit was acknowledged when she received the following:

. The Mayor’s Award for Lifetime Achievement in the Arts

. The Alberta Foundation for the Arts

. The City of St. Albert

. The Government of Alberta

Joanna now resides in North Saanich, B.C. pushing her discipline in new directions while growing and creating amazing clay sculptures in her Cinnamon Hill Studio. In her own words her philosophy resounds in this statement:

“My work is grounded in real values and experiences. Unless I attempt something beyond what I have already mastered, I will cease to grow”.

“The world of reality has its limits; the world of imagination is boundless”.

One of Alberta’s celebrated artists, Roger Belley mines the heart and soul of the sweet air, dappled sunshine and lapping waves of his landscapes. “Spending days in the Rockies or canoeing lazy rivers” says Roger an avid outdoorsman, “can be invigorating to an artist’s soul, creating the impetus to put paintbrush to canvas”. The feelings evoked haunt the memory.

His creative eye evolved during his career as a Parks’ Coordinator: Interpreting when a Red Osier Dogwood is at its reddest revealed so much about the fall and how an artist can strive to depict nature accurately.

Roger discovered, at age 12, that a good landscape painting could immerse him into a world of feelings. It was a library book about Tom Thomson and the Group of Seven that set him off on his artistic journey. The honesty and romanticism of the work done by those artists affected him at a deep place that most 12 year old boys are unaware of; Thomson and the adventuresome Group of 7 became Roger’s boyhood heroes.

Primarily self-taught, Roger studied at the University of Alberta as well as The Alberta College of Art. He currently lives on Vancouver Island where he shares a studio with his partner, the gifted, award-winning, multimedia artist, Joanna Drummond.

Another of Roger’s great loves is talking about Canadian art history and welcomes the opportunity to discuss other artists’ creative work. He welcomes anyone who would like to contact him to drop him a line at roger@cinnamonhillstudio.com